Last weekend I joined a couple hundred like-minded people in Williamsburg to protest the Trump administration’s inhumane policy of snatching children away from their immigrant parents at the nation’s southern border. It was one of hundreds of such gatherings that sprang up around the country as horror-struck Americans reacted viscerally to the searing images of wailing children being herded into makeshift jails. 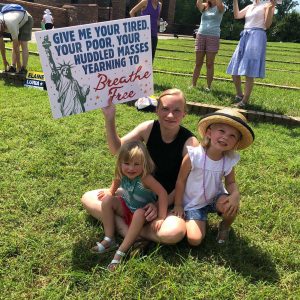 My two young granddaughters, already no strangers to activism in the age of Trump, were there too, hoisting signs with the rest of us. I explained to 5-year-old Ellie that children her age and even younger had been separated from their parents.

“My age?” she repeated, the enormity of this cruel policy clearly registering on her face. I could see the mental wheels turning as she imagined how she would feel if she and her little sister were torn away from their mom and dad by agents of the state.

Later it occurred to me that this loathsome policy is no historical aberration. On the contrary, there’s plenty of precedent for it.

It happens every day in the United States as our criminal justice system packs off parents to prison, often for nonviolent crimes, to serve the harshest criminal sentences in the world, leaving their innocent children to fend for themselves. In the majority of cases these are dark-skinned people, like the immigrants clamoring to cross the border. To many of the more privileged among us, these shattered families are invisible. To opportunistic politicians, it’s a sure-fire way to look tough on crime – “family values” be damned.

In truth, the precedent goes back centuries. That fact was driven home to me when I was researching my forthcoming book, Uncle George and Me: Two Southern Families Confront a Shared Legacy of Slavery. In a hushed reading room at the Library of Virginia, I thumbed through boxes of yellowed documents collected from Civil War-era courthouses in search of clues about my slave-owning ancestors.

In one of the boxes was a letter in halting script to the sheriff of Mecklenburg County from one Jennie Brown of Corinth, Mississippi, dated June 18, 1882, two decades after emancipation. “…Please, inquiring of a family by the name of King,” the plaintive note read. “I was sold before the war by the sheriff….” There was no record of any reply.

Jennie Brown was one of hundreds of thousands of slaves ripped apart from their families in Virginia and other border states, sold to slave traders who shipped them off to the vast cotton plantations of the Deep South without a care about their sundered family ties. Most of them never managed to reconnect with their kin.

It was a dark, dark chapter of our history. How depressing it is to see it echoed in 2018.