You’ve probably heard of Selma, Alabama, one of the key flashpoints of the civil rights era. But what about Marion, a smaller town a few miles down the road?

And you’ve heard of Rev. Martin Luther King Jr. and perhaps a few other civil rights martyrs. But what about Jimmie Lee Jackson?

Part of the richness of last fall’s Living Legacy Pilgrimage through the Deep South crucible of the civil rights movement was that it exposed me and my fellow pilgrims to some of the lesser-known people and places of the movement.

Places like Marion, where nearly two-thirds of the population is African-American. Our tour bus dropped us off at Zion United Methodist Church, a modest house of worship across the street from the Perry County courthouse on the town square. There, Rev. Richard Bryant told us the victories won by civil rights pioneers at such a high cost in places like Marion in the 1960s are being rolled back by a resurgence of racism in the 21st century.

“We left the fire simmering, and now in 2017 it’s blazing up again,” he said. “We didn’t put the fire completely out.”

In 1965, almost no African-Americans in Perry County could vote because the white minority that controlled the local power structure made it virtually impossible for them to register, using tactics like poll taxes and literacy tests. On the evening of Feb. 18, after a voting-rights rally at Zion Church, a large group of disenfranchised blacks marched out the front door of the church and across the square to the county jail. There they were met by dozens of Alabama state troopers, who shot out the streetlights and waded into the crowd, savagely beating them and chasing them all over town.

One of those injured in the melee was 80-year-old Cager Lee, one of the first black voting registrants in Marion. While trying to get him to a doctor, his grandson Jimmie Lee Jackson was cornered in a café, pinned against a cigarette machine and shot in the stomach by a state trooper. He died in a Selma hospital eight days later. It was Jackson’s death – for which no one was ever prosecuted — that ignited calls for a voting-rights march from Selma to Montgomery a month later, during which dozens of marchers were bludgeoned and tear-gassed by law enforcement officers. That “Bloody Sunday” assault pushed Congress to enact the 1965 Voting Rights Act, which outlawed tactics designed to deny African-Americans the vote.

The police violence that culminated in Jimmie Lee Jackson’s murder was actually bloodier than what occurred on “Bloody Sunday,” but it is little remembered today because no photographs or film footage have survived.

Willie Nell Avery was one of those assembled in Zion Church the night Jackson was killed, and was later tear-gassed on “Bloody Sunday.” Today she serves on the Perry County Board of Registrars. “I’m an old lady, but I’m still on the battlefield,” she told us, echoing Rev. Bryant’s warning about renewed assaults on voting rights. “I never thought I would live to see the hatred and animosity I see today,” she said.

Evelyn Turner, along with her late husband Albert, was also on the front lines of the voting-rights struggle in 1965. And 20 years later, their activism landed them in federal court facing criminal voter fraud charges. They were acquitted in the 1985 trial, but Evelyn Turner has carried a grudge ever since against the man who prosecuted them: none other than Jeff Sessions, Donald Trump’s attorney general, who was a U.S. attorney in Alabama at the time.

In 2016, Mrs. Turner traveled to Washington to take part in a ceremony honoring the foot soldiers of the 1965 voting rights struggle. Sessions was there too. At the end of the program he approached Mrs. Turner and tried to hug her. She was having none of it, she told me: “I said, ‘You tried to put me in jail for 250 years. You ain’t going to hug me.’”

On our way from Marion to Selma, we stopped at Jimmie Lee Jackson’s gravesite in an old slave cemetery. The granite marker is pocked with bullet holes from sporadic acts of vandalism. In Selma we visited Brown Chapel AME Church, a beautiful brick edifice with three balconies and huge stained-glass windows surrounded by a public housing complex. It was the staging point for the “Bloody Sunday” march.

Late that afternoon, our group re-enacted the march over the humpbacked Edmund Pettus Bridge on the edge of downtown Selma. We marched in silence, two by two, high above the muddy Alabama River, which meanders alongside an old forest draped in Spanish moss. As we walked, I thought about the setbacks that voting rights have suffered in recent years. The Supreme Court has emasculated the Voting Rights Act. State legislatures around the country have enacted photo ID laws and other new barriers to voting. And I thought of the exhortation we had heard that morning from Rev. Bryant back at Zion Church: “Now it looks like we’ve got to march again.” I think he’s right. 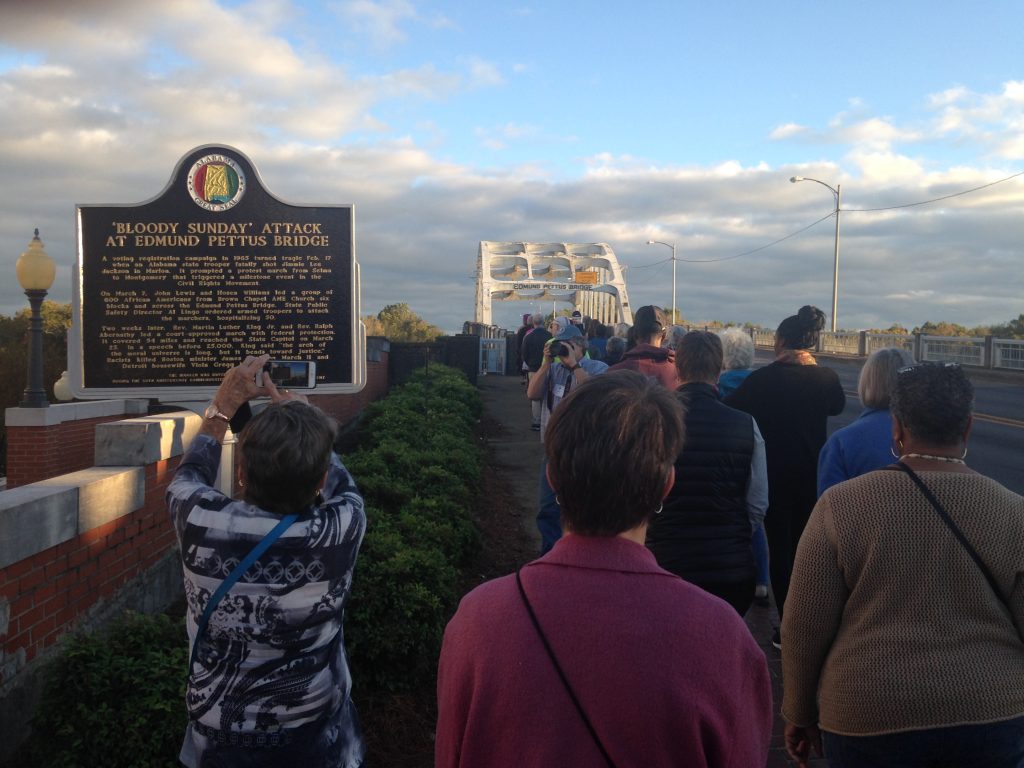