Uncle George and Me: Two Southern Families Confront a Shared Legacy of Slavery 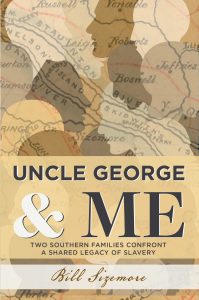 Journalist and author Bill Sizemore spent eight years researching and writing the story of his slaveowning Virginia ancestors, their slaves, and the descendants of those slaves.

The author’s great-great-great-grandfather was a small-time tobacco farmer in Mecklenburg County, Virginia. In contrast to large planters with hundreds of slaves, he was far more typical: He owned fewer than 20. The book traces the lives of generations of African-Americans who descended from his slaves, up to the present day. In microcosm, it is the story of Virginia and the South from the slavery era through the Civil War, Reconstruction, Jim Crow, the Great Migration, the civil rights era, and the continued racial disparities of our time. Thousands if not millions of American families on both sides of the color line spring from similar roots, but theirs is a seldom told story – perhaps due to a sort of self-induced amnesia, a defense mechanism to avoid confronting a painful past.

This book is an attempt to overcome that amnesia and thereby stimulate a biracial dialogue about slavery and its crippling legacy, which continues to bedevil the nation today. 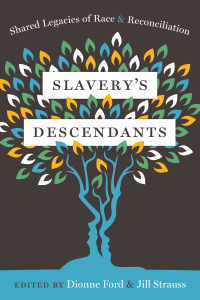 Race remains a potent and divisive force in our society. Whether it is the shooting of minority people by the police, the mass incarceration of people of color, or KKK rallies, it is clear that the scars from the United States’ histories of slavery and racial discrimination run too deep to simply be ignored. But what are the most productive ways to deal with the toxic and torturous legacies of American racism?

Slavery’s Descendants brings together contributors from a variety of racial backgrounds, all members or associates of a national racial reconciliation organization called Coming to the Table, to tell their stories of dealing with America’s racial past through their experiences and their family histories. Some are descendants of slaveholders, some are descendants of the enslaved, and many are descendants of both slaveholders and slaves. What they all have in common is a commitment toward collective introspection, and a willingness to think critically about how the nation’s histories of oppression continue to ripple into the present, affecting us all.

The stories in Slavery’s Descendants deal with harrowing topics—rape, lynching, cruelty, shame—but they also describe acts of generosity, gratitude, and love. Together, they help us confront the legacy of slavery to reclaim a more complete picture of U.S. history, one cousin at a time.

One of those stories is an excerpt from Uncle George and Me.

A Far, Far Better Thing: Did a Fatal Attraction Lead to a Wrongful Conviction? 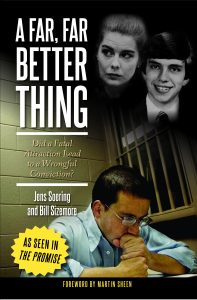 By Jens Soering and Bill Sizemore

With a foreword by Martin Sheen

In 1985, socialites Derek and Nancy Haysom were found brutally stabbed to death in their home in Boonsboro, Virginia. When suspicion turned to the Haysoms’ beautiful but troubled daughter, Elizabeth, and her German boyfriend, Jens Soering, their case became one of the most notorious in Virginia history. After fleeing with Elizabeth to Europe, Jens ultimately confessed to the crime, under the illusion that as the son of a German consular official he’d be granted diplomatic immunity. He believed he was nobly sacrificing his life for love—just as Sydney Carton does for Lucie Manette in Charles Dickens’ A Tale of Two Cities.

Now published for the first time in English, Jens tells his side of the story—of how a naïve and reckless scholar fell into a world of deception, drugs, and ultimately murder. His compelling, revelatory account is accompanied by the painstaking analysis of Bill Sizemore, a journalist who’s followed the Soering case for more than a decade. In parallel with the 2016 documentary film about the murders, called The Promise, this book not only points to a miscarriage of justice, but also showcases the tragedy of misplaced love and a catastrophically foolish declaration.

Jens and Elizabeth were released on parole in November 2019.