Here’s an op-ed I wrote for the Virginia Gazette of Williamsburg (July 11):

It’s good news that a working group of administrators, alumni, students, faculty and staff has been created to develop principles for renaming buildings at the College of William & Mary.

As the United States grapples with a renewed focus on the nation’s shameful history of slavery and its racist legacy, William & Mary has much to answer for in that regard. As the working group begins its deliberations, allow me to offer one timely reminder: 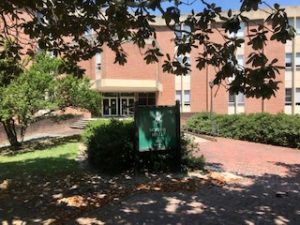 Measured against the college’s 327-year history, Morton is a relative newcomer. The boxy specimen of Brutalist architecture opened in 1972, a year after I graduated. But the little-known story of its namesake is truly toxic.

Richard Lee Morton was a history professor at W&M for nearly half a century, 1921-68, much of that time as chairman of the department. He was prominent among a generation of historians who provided the intellectual underpinnings for the gauzy Lost Cause myth of Southern white innocence.

Morton and like-minded scholars portrayed Reconstruction, the brief period of biracial democracy in the South after the Civil War, as a dark era of corruption and misrule. Likewise, they celebrated the Redeemer governments that restored white dominance — often violently — in the late 19th century as noble and praiseworthy.

That’s the version of Southern history that I and generations of other schoolchildren were taught. It was only later that I learned the truth: The pioneering African-American officeholders of the Reconstruction era, fresh from the degradation of slavery, fostered some of the most progressive and enlightened legislation in American history. The Redeemer governments that followed in their wake reversed most of those gains and disenfranchised African-Americans on a massive scale.

Morton’s book “The Negro in Virginia Politics, 1865-1902,” is shockingly racist by today’s standards. I quoted some of its most cringeworthy passages in my book “Uncle George and Me.” Here are a few:

Reconstruction, he wrote, was an “evil period” in which the freedmen were “but shortly removed from savagery and were utterly unfit for citizenship in a democracy.”

“Politics,” he wrote, “with its excitement, its conventions and speech-making, was very fascinating to these childlike people.”

In 1900, a convention was called to replace the 1868 constitution enacted by Virginia’s Reconstruction government. There was no attempt to conceal its purpose: the effective disenfranchisement of the state’s African-American voters. The resulting constitution of 1902 established poll taxes, property requirements and literacy tests as prerequisites for voting. The upshot: Virginia’s electorate was cut in half. African American participation at the polls plummeted to a negligible level and stayed there for decades.

That was all just fine with Richard Lee Morton. “The negro had been a failure and a menace in politics … . Therefore he must be removed,” he wrote. “It is a matter of regret that it has been necessary to disfranchise a large body of citizens by methods some of which did not seem in themselves commendable,” but they “threatened to corrupt the whole body politic of the Commonwealth.”

White control in post-Reconstruction Virginia and throughout the South was often enforced by lynchings — mob executions of perceived criminals, almost always black. Contrary to a common public perception of lynchings as spontaneous outbursts of violence, they were often premeditated, even to the point of being announced ahead of time in the local newspaper. Many lynchings were celebratory public spectacles. Torture, mutilation, dismemberment and burning of victims’ bodies were common.

That, too, was all OK with Morton. “In those days,” he wrote, “lynchings for the crime of rape which is the most unspeakably hideous of all crimes to a Southerner, especially when the offender is of another race, was deemed the only quick and certain method of punishment and a wholesome lesson to would-be offenders.”

Morton’s words speak for themselves. His hateful whitewashing of Virginia’s dark history poisoned the minds of generations of students. His memory should not be honored by a university now striving to be a beacon of inclusion and diversity.

Bill Sizemore, a 1971 William & Mary graduate and retired journalist, is the author of “Uncle George and Me: Two Southern Families Confront a Shared Legacy of Slavery.” He lives in James City County. Contact him at billsizemorebooks.com.