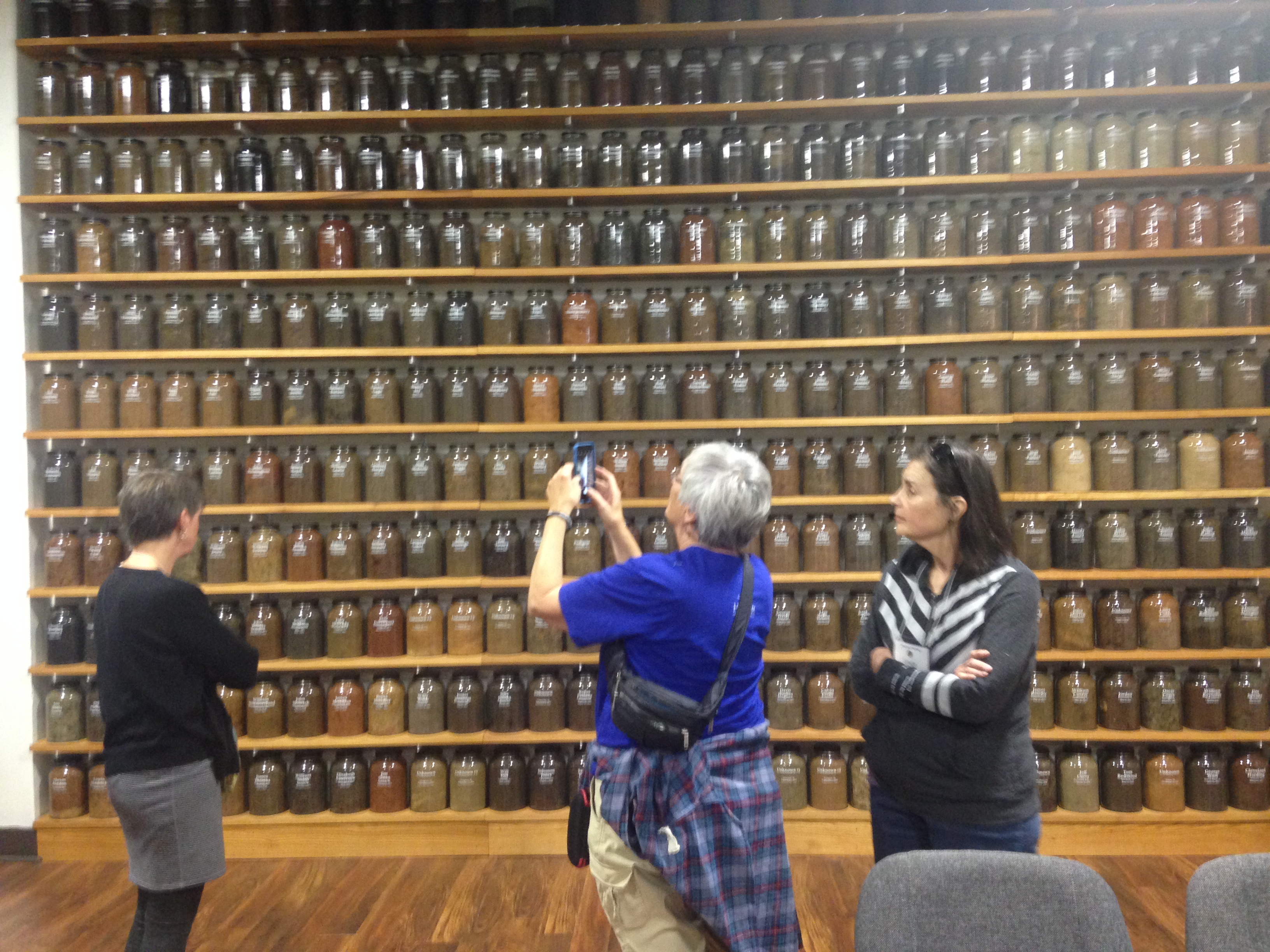 The Mason jars tell a gruesome story. Hundreds of them, lined up in rows along a wall of shelves, are filled with soil in a rainbow of hues from black to brown to caramel to red. Each jarful of dirt was dug up at the site of a lynching somewhere in Alabama.

The arresting display adorns the headquarters of the Equal Justice Initiative, which sits on the site of a former slave warehouse in downtown Montgomery. As part of its mission to promote racial justice, the nonprofit has documented more than 4,000 lynchings – vigilante executions of presumed criminals, almost always African-American – across the South between 1877 and 1950. The jars of dirt are a sobering symbolic reminder of an ugly era when black people were denied the basic trappings of justice and Southern soil was stained with their blood.

My fellow pilgrims and I visited the lynching display on the Living Legacy Pilgrimage to civil rights sites in the Deep South. From Montgomery we rolled on to Mississippi, where we encountered still more reminders of the deadly fruits of American racism.

At Mt. Zion United Methodist Church in Longdale, two women recalled a terror-filled night in June 1964 when their families were devastated by racial violence. It happened during the first days of “Freedom Summer,” when scores of idealistic young volunteers came south from all over the country to help African-Americans gain the rights of citizenship they had long been denied. Two of those volunteers – Mickey Schwerner, a white New Yorker, and James Chaney, a black Mississippian – had visited Mt. Zion Church a few days before to make plans for setting up a “freedom school” there to teach basic literacy, black history and politics.

Evelyn Calloway’s parents, Bud and Beatrice Cole, weren’t civil rights activists. They were just dedicated church members who were attending a business meeting at Mt. Zion the evening of June 16. On their way home they were stopped by armed Ku Klux Klansmen, who pulled Bud Cole out of the car and demanded to know where Schwerner and Chaney were. When he said he didn’t know, they beat him viciously and threw him into a ditch. Then they pointed their guns at his terrified wife, who fell to her knees in prayer. One of the men told her, “Old woman, you can pray all you want to, but praying ain’t gonna help you now.” After the Klansmen left, Beatrice Cole pulled her husband out of the ditch and took him home, where she sat beside his bed all night, a shotgun at her side. Bud Cole suffered five broken ribs, a broken jawbone and a ruptured spleen, and every nerve in one leg was damaged. He was in constant pain the rest of his life.

Jewel McDonald’s mother and brother were also beaten on their way home from church that night. Her mother’s collarbone was broken. After the attacks, the Klansmen burned the wood-frame church to the ground. “We were scared to death,” Jewel told us. “We were afraid they’d burn the house down too.”

A few days later, Schwerner and Chaney drove to Longdale with a third volunteer, white New Yorker Andrew Goodman, to inspect the ruins of the burned church. On their way back to the town of Meridian, they were stopped for speeding. Sheriff’s deputies turned them over to the Klan, who shot them down in cold blood. The bodies were found six weeks later, buried under an earthen dam. Seven Klansmen and a deputy sheriff were convicted of civil rights violations in the case in 1967.

We visited James Chaney’s gravesite just off a narrow country road outside Meridian. We were joined there by his daughter Angela Lewis, who was 10 days old when her father was killed. She told us her grandmother had to leave Mississippi because of death threats after her son’s slaying.

At Tougaloo College we met Hollis Watkins, a sharecropper’s son who joined the civil rights struggle in high school and was repeatedly arrested for his activism. In 1963 he was locked up with 13 other men in a 6-by-6-foot maximum security cell in the notorious Parchman penitentiary. Before leading us in a medley of freedom songs in his rich baritone, Hollis reminded us of the challenges that remain a half-century after the civil rights era. Among them: trying to save the embattled public school system and getting more young African-Americans to run for public office.

“More things have remained the same than have changed,” he said.

In the rural hamlet of Money, we stopped at the overgrown ruins of Bryant’s Store, where Emmett Till, a black 14-year-old visitor from Chicago, whistled at the white storekeeper’s wife in 1955 – an offense for which he was tortured and murdered. After his battered body was recovered from the Tallahatchie River, his mother insisted on an open-casket funeral. Gruesome pictures of the body, published in Jet magazine, shocked the nation. Nevertheless, his killers were acquitted by an all-white jury. As a train roared by alongside the dusty Delta road, flat cotton fields stretching off endlessly to the horizon, we read aloud the names of dozens of civil-rights martyrs.

One of them was Medgar Evers, who headed the Mississippi NAACP in the tension-filled early 1960s. We visited his home in Jackson, a modest tan brick rancher with aqua trim under towering pine trees on a quiet residential block. As we stood in the carport, our guide told us that Evers and his wife trained their children to take precautions such as dropping to the floor and crawling to safety in the bathtub when they heard loud noises. On June 12, 1963, after a late-night meeting, Evers was gunned down in the driveway as he walked toward his front door. It took 30 years for his killer to be brought to justice.

As I had done so many times that week, I asked myself: Would I have that kind of courage? Would I be willing to put my life on the line for racial justice?

In the era of Donald Trump, they are not idle questions.